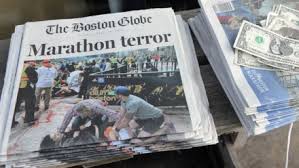 Some calming, common sense words posted today by Jim Wright about the Boston Marathon Bombings.  Click through below to hear all he has to say, though the message can perhaps be summed up in his statement: “It’s going to take time to figure out who, how, and why. And you’re just going to have to put on your big boy pants and deal with it.”

As somebody who has spent the better part of my life in the intelligence field, I can tell you that this period, the immediate aftermath of the event, is far more complex and far more difficult than you can possibly imagine – even if you’ve had direct experience in this sort of thing. The sheer volume of information is staggering, almost incomprehensible. For example, depending on the situation there might be half a million phone records worldwide to look through, cell and landlines, text and data and email and so on, connections upon connections, in this day and age those bombs could have been set off from the other side of the world and watched via real-time internet video. And that’s just one tiny piece of the puzzle. We live in the Information Age, the problem isn’t that there isn’t enough information, the problem is that there is huge giant mountains of it – and most of that is irrelevant or false. But it’s all got to be gone through, every bit of it. And that can’t be done by machines, not really, people have to look at it. Trained people. Experts. Not conspiracy nuts, not just any Joe Shit The Ragman. Actual real educated and trained and experienced experts have to go through the information, slowly, carefully, bit by bit. And their difficult job is made even more difficult because not only are the investigators literally looking for the mangled pieces of a very tiny needle in a very large, very cluttered, very rutted and very muddy storm-tossed hay field, there are also certain folks who are actively working to make and shovel more hay, wheat, rye, grass clippings, manure, and any other metaphor you’d care to dream up, on top the whole mess.

via Stonekettle Station: Unindicted Co-conspirators Of The Boston Bombing.

3 thoughts on “Don’t Spread the Fear”