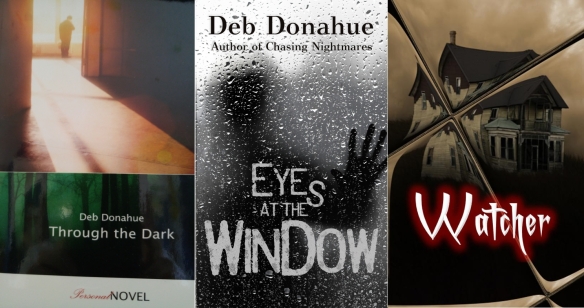 This week I want to explore the three faces of Luke, the main male character in my “trilogy” of three books from one idea. Luke’s first name remains the same in all three versions, mainly because I think it goes so well with the vision I have of him, but also because I like the balance of the name Luke paired with that of his twin brother, Zeke.

Zeke is pretty much the same in all the books, as is the reason Luke is hiding in Sarah’s barn (Miranda in Through the Dark and Eyes at the Window versions). Zeke, the irresponsible twin, has disappeared.  Luke believes Sarah’s neighbor knows something he’s not telling so he is spying on him, staying out of sight since he looks exactly like his brother.

In the original idea, this is actually Luke’s second visit to the area.  Early in that story, he was caught breaking and entering the neighbor’s house, and was sent to prison. In the version written for PersonalNOVEL, however, I had to play down the bad boy image per their guidelines (plus all I really remembered from the original manuscript was that he’d spent time in prison, not why). Therefore, Luke’s stint in prison was a few weeks earlier, much shorter, two weeks, and was the result of mistaken identity for a crime his brother committed.

On the other hand, not telling Sarah about his prison time also serves as a reason for her to doubt him when she finds out about it, so if I don’t use that idea, then I need to come up with another good reason for her to have second thoughts.

In this third reincarnation, I also wanted Luke to be a little darker, more layered and complex.  That thread is there in my first versions of him, but I want this book to reflect the dark, gritty realistic tone I put into my Street Stories books. Compare the following excerpts to see if you think I’m succeeding in that.