In celebration of the release of my second Street Stories suspense novel, Bend Me, Shape Me, I am offering downloads of one of my short stories FREE on Amazon starting today and going through Thursday–five days. 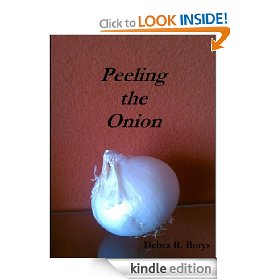 Peeling the Onion is actually sort of a precursor to Bend Me in that I wrote it while I was developing Snow’s character.  In many ways the story’s protagonist, Star, is the first incarnation of Snow, before I got to know her better.  The story was originally published in a print magazine here in Seattle called City Slab.

I was surprised and pleased to see that one reader has given Peeling the Onion a very thoughtful review on Amazon.  She may have only rated it with 3 stars, but everything she says about it thrills me.  This is exactly the kind of reaction I hoped for when I wrote the story.

Star battles herself, her memories, her addictions, rage, and voices in her head. She’s homeless and living by sheer will and wit in Seattle’s Capitol Hill neighborhood.

Good girls never cry, but they do see black twisted tattoos that look like barbed wire strung around her neck. “Daddy doesn’t like messy girls. Ugliness lives inside me, but I’m a good girl. Daddy taught me right. So I hide when I can….”

Lake Washington has a view to live for, and Star has a life she will die for. This short story will take skin when it peels film from our eyes. It is raw, realistic, and all too true for many who have lost all sense of purpose, and their way. If one searches, they will uncover reasons, but most just turn away.

Star knows how to block some of the thoughts to shut off her mind, to peel herself like an onion until there is nothing left but the soft inner core.

This is not a story for the squeamish, nor for the heartless. It gives us a warning to look closer because everything is not as it first appears.

If you own a Kindle or use the Kindle app, I hope you’ll check it out and let me know what you think.

1 thought on “A Thank You Present For Everyone”