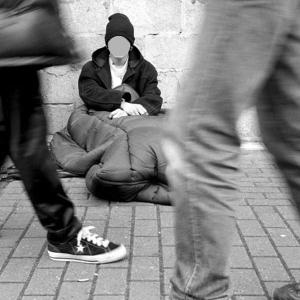 I just got back from a walk with the dog.  As I was approaching Luna Park Cafe, one of my neighbors, a man who lives in transitional housing a half a block away, was walking toward me in his usual slow rambling way.  I don’t know his name but often when I say hi to him, he is able to smile and say hi back.  Other times, I don’t think he knows that I am there.  I’m sure his level of alertness depends a lot on what kind of medication they have him on.

I also noticed a police car just behind him, trailing slowly in his wake and assessing him as if he might be a danger to the community.  When I smiled at my neighbor and said how are you doing, the officer suddenly lost interest in him and drove away.  However, a half a block further away, just outside the Java Bean, I found a young man sitting on the sidewalk.  He was stuffing spilled clothes into a shopping bag and a backpack and bike lay next to him on the ground.  He was crying.

I asked him if he was okay and he said no and tried to explain, but he was crying so hard I couldn’t understand what he was saying when he tried to tell me what was wrong.  I asked if there was anything I could do to help but all I could understand from his answer was that there was nothing anyone could do to help.  He was only in his early twenties, curly tousled brown hair and holes in his sneakers.

Just then the police car I’d seen earlier pulled up to the curb and the officer got out.  I stood up and said “I think he needs some help” but all the policeman did was tell me to step aside.  He then grabbed the young man by the shoulder and pulled him to his feet, taking him to the front of his car where he spread-eagled him across the hood.

Unsure what to do, I looked around, helpless.  Another patrol car had also pulled up and a female officer was approaching so I decided maybe I should go.  But as I walked away, I wished there was something I could have said to help the young man, or at least talked to the cop to report that the young man had not done anything wrong that I could tell.  Of course, it was too late, though, and all I could do was pray that God would be with the situation and send the boy someone who would listen to him and possibly help him.

Since it was still pretty hot today, Sophie and I did not walk far and on our return trip, I was happy to see the curly head of the kid standing in about the same spot he’d been before.  The clothes he’d been stuffing into a bag were strewn all over the sidewalk. I stopped again to ask if everything was all right and he started to cry a bit, but this time at least I could understand him.

It seems he was digging through a dumpster where someone had thrown out a bunch of clothes.  While he was doing that, his phone fell out of his pocket into the dumpster.  He didn’t realize it until he was down the block a way. It contained all of his contacts on it and access to the resources he relied on for help.  When he went back to look for it, the garbage collector had already dumped everything into the back of the truck.  Either at that point or the first time he was going through the trash, I couldn’t tell which, someone called the police on him.

The young man was heartbroken because he’d lost his lifeline and felt he had nothing left.  Maybe even worse, he was upset and confused about why someone would call the police just because he was going through the trash.  “It was stuff nobody even wanted,” he said.

Just like the clothes in the dumpster, nobody wants homeless or mentally ill people, either.  We’d rather turn our backs on them, or call someone to come and take them away.  If someone talks to themselves while they’re walking down the street, they are shunned and suspected of ill intent.  If someone is sitting on a sidewalk crying, it means it’s okay to just drag them to their feet and throw them across a car hood instead of asking them to “Please get up and come with me.”  And people like me are just supposed to “step away.”

Well, God damn it, I’m not going to step away.  I’m stepping toward.  I’m walking with.  I had nothing to offer the young man except my sympathy and understanding, but I did tell him about Teen Feed in the U-District.  I also told him if he could find a way to get to Freemont he should ask people there how to contact Rex at Homeless In Seattle.  One of the contacts Rex knows refurbishes donated cell phones and gives them free of charge for the homeless to use.

It won’t give the kid back his list of contacts, but maybe it will give him a bit of hope that things can get better.  That there are people out there who care and want to help.