In response to an article I read in the local paper here, I was inspired to write a letter to the editor.  Who knows whether they will post it or not.  I am, after all, disagreeing with an idea that seems to be prevalent here in this Midwestern town.  I also had to edit it down to 400 words.

In case if never makes it to print, I thought I would post the directors cut, unedited version here to see what you think of the subject.  I know what Sophie thinks.  If she could, she’d organize a rally in protest.

As a former resident of dog-friendly Seattle, WA, I was delighted to hear about the dog park to be included in the new Rotary Park plans. My dog Sophie had many furry friends at the small dog park near our previous home in West Seattle and has been noticeably missing her four-pawed playtime activities. My joy was short lived however, when I saw the article in Wednesday’s paper reporting council members seem to think this long overdue dog park is a good excuse to pass a city ordinance banning dogs from entering LaSalle city parks.

As any good dog owner can tell you, a dog park is no substitute for taking your dog for walks. Time spent off leash at a dog park is good for exercise and giving the animal an opportunity to socialize with other canines. But going to a dog park is an every once in a while method of entertainment, and not intended to take the place of walking on leash.

Walking with their human on a leash is an activity that needs to be done daily if not two or three times a day. Accompanying owners on walks not only provides exercise for both dog and human, but provides structure and discipline for the pet that goes a long way in improving that animal’s behavior and temperament. A dog that is walked regularly is less aggressive toward humans and other dogs, and less destructive to property than a dog bored out of her mind because the only fresh air and activity she sees is when she is tied to a tree just long enough to take a bathroom break.

It is hard enough to take a dog for a walk in this city. The lack of sidewalks and the condition of many existing ones means at least half the journey has to be done walking on the street while watching for traffic. It is also impossible to enjoy spending time with your dog for long at a dog park. The only dog park currently existing provides no shade for human or animal, and no easy access to water. Baking in the sun while your dog wrestles with his dog buddies offers none of the pleasant recreation found on walking trails and sidewalks and parks.

Most dog owners pick up after their pets and train them to be well behaved in public. Why should they be restricted from enjoying a walk in the park with their dog just because a few owners don’t take responsibility? Rather than ban dogs, we should make it easier to be a responsible owner. Post notices clearly stating the rules of behavior and penalties for failure to meet the criteria. Provide trash bins and complimentary waste disposal bags next to a warning that failure to pick up incurs a healthy fine. Raise the fine, if that’s what it takes, and by all means enforce that law when broken. But don’t enact a punitive, prohibitive law that prevents people and man’s best friends from enjoying our city parks.

If you do, then what next? Should we ban squirrels, rabbits, and birds? There was a possum in our back yard the other day, and I’ve seen raccoons within city limits, too. They also defecate in parks and I don’t see anyone taking the responsibly of picking up after them.

I started pinning pictures of dogs to my Pinterest board and started thinking about my wonderful Dixie and Dallas who are no longer with me.  They were such good company for me during the six months we Iived in Fairbanks, Alaska *in the middle of winter!* (What was I thinking? lol)

Here’s to remembering my hearty little Eskimos and their winter wonderland adventure. 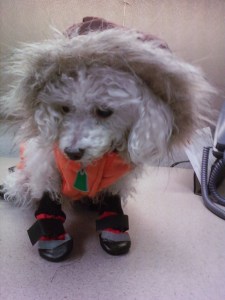 I can’t believe it’s been so long since I posted. This past weekend was the coldest so far up here. Negative 23 during the day on Saturday–almost couldn’t get my car started. But I did discover there is an engine warmer plug under the hood, so all I had to do was buy an extension cord and now I plug in every night and have no trouble getting going in the morning.

I did a little shopping this weekend, and went to see a movie on Sunday, The Blind Side. Great movie, made me laugh and yet touched my heart. I recommend it to anyone. I usually don’t go for movies that have playing sports as one of the main plot points, but football was just a medium through which the people grew together as a family. Go see it, really.

I also bought new dog coats, because the ones I have just didn’t seem warm enough. Dixie’s is particularly adorable so I had to take pictures. Here’s a couple, there’s a couple more in the Pictures page.

via Alaska: documenting the far North one blog at a time