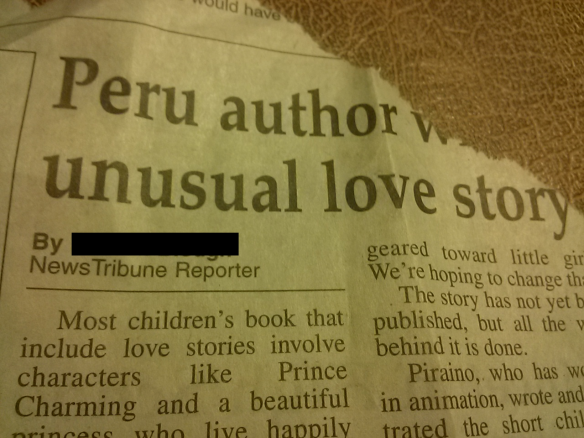 Hello?  Is anybody there?  Am I here? Or am I, maybe, invisible?

Before you answer that question, answer this, because maybe I am totally backwards in my thinking.  Which is more notable, would you say, a local author who has had three books released by a small press, or a local writer who wrote and illustrated a children’s book twenty years ago that is not even published yet? He has instead started a Kickstarter campaign to raise $10,000 to self publish it. I have it in my mind that it’s option A, but realize that I am a prejudiced respondent.  I am author A.

Sure, author B’s is an unusually titled children’s story, and he illustrated it. Contrast that, though, by adding in the fact that I have had several short stories accepted by paying markets, also self published a novel and two short story collections, and am trying to earn my living as a writer.  Add in the knowledge that no one, absolutely NO ONE, needs to have $10,000 to self publish a book.  Not in today’s e-book market where free self publishing is just a mouse click away.  Even if you feel print books are the only way to go, both CreateSpace and Lulu.com offer a non-fee trade paperback publishing option.  I’ve been there, done that, and paid $0.

So which author, do you think, earned an article in yesterday’s News Tribune? Maybe the title above gives the answer away. Despite my having sent in several news releases to mention events like a presentation at the Princeton Public Library, attending both the Dekalb Writer’s Fair and Chicago’s Printer’s Row Festival, and the fact that I was donating all book sales on June 7 to a homeless organization, my local paper has not mentioned me or my books once.  That’s nada, nyet, zip, big old goose egg.

I know I sound like sour grapes.  I feel like I’ve been eating sour grapes, in fact. But that’s only because I can’t afford the more expensive, sweeter grapes because no one seems to notice I’m standing here hawking my wares to a bunch of fishermen who would rather pull a soggy sock out of the pond than a fish of any size. Maybe the problem is that, as a lowly fish, I don’t know any influential movers or shakers in the wool trade.