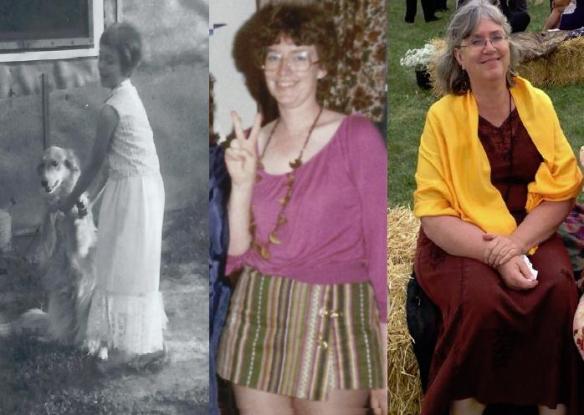 I know who I am now. I even think I know who I was during my teen years when I identified with the “Make Love, Not War” hippies of the day.  But I found a letter written somewhere in between the two that makes me think perhaps some stranger possessed me and took over my thoughts, actions and personality.

Oh wait, I know what possessed me.  Love.

Fear the love bug, people.  Some of them bite.  And if you are allergic and don’t know it, you may turn into someone completely different than the person you were meant to be.  I have proof.  I found it in a box of papers from my storage unit that had journal entries and stories going back to high school days and continuing through the late eighties.

Earlier story starts and ramblings reveal an idealistic kid who wanted to be independent and throw off the shackles of a Vietnam War-ridden society.  An account of a dream I had reveals a secret desire to journey in a hippie van full of flower children to a community farm.

Well, the farm part came true.  But the van took a wrong turn somewhere. Instead of ending up growing marijuana with a long-haired sensitive dude who writes poetry and wears a tie-dyed shirt, my farm looked more like a survivalist’s compound, with well-stacked bins of toilet paper and canned goods, a large garden, and animals we raised and butchered ourselves.

Not that there’s anything wrong with that. I enjoyed being self-sustaining and the meat and home-grown goods were the best I’ve ever tasted.  If it wasn’t so much work, I’d love to do that now as well.  The real detour I took in my life was turning from a pacifistic liberal-leaning individual to a gun-toting, conservative, Paul Harvey-loving reflection of my husband.

Yes, that’s right, I said Paul Harvey-loving.  This from the woman who, last year, couldn’t stand the sound of the man’s voice even when she couldn’t make out the words he was spewing.  The proof is plain in a letter I wrote to him dated June 1975.

This is not a fan letter, though I do enjoy your editorials.

In 1975 I had been married two years and was two years away from having my first child. The body of the letter is to let Mr. Harvey know that one of his sponsors, Kerr (who makes canning lids and jars) appeared to be deliberately withholding packages of canning lids as part of a conspiracy to force people to pay more money by having to buy jars AND lids even if they didn’t need jars.

Oh yeah, I forgot to mention I had turned into a conspiracy theorist also. How could I not be when the proof was so plainly before my eyes.

There are five major grocery stores in my area and only one of them has received a shipment of lids.  That’s one shipment, mind you.  Yet all of these stores have jars still sitting on the shelves.

I seem to be saying that Mr. Harvey should be made aware of these nefarious and unfair practices because he himself was such an upholder of justice and the American way.  “Perhaps if enough of the silent majority gets angry,” I wrote, “some things might change.”

Some things did change, thank God.  I did.  I grew and changed and opened my mind.  I found the path through the woods to the person I used to be and I built on that.  I made a mess sometimes along the way and didn’t always travel in a straight line, but overall I’m happy with the track my life is on these days.

Now I sign my letters with “Debra R. Borys, author of the Street Stories suspense novels” instead of “Debra Borys, farmer” and I will never again tell Paul Harvey or anyone like him “P.S. Keep up the good words on the air.”  Instead I will end with:

P.S. Keep true to the person you are at the core, whether that person is conservative, liberal, or doesn’t give a damn for either. And if you lose sight of that for a time, know that it is never too late to find yourself again.