Not slow in the sense of miles per hour. I hit Idaho which has a 75 mile per hour speed limit.  But I didn’t have many Facebook Status updates today.  Partly it was because of lack of wireless access, partly because there wasn’t a heck of a lot to see in the often boring landscape, and mostly because I was bone tired all day for some reason.  Only one picture to post for today’s Journey Journal,

Finally, internet access again. It ain’t much to look at, but it’s prettier than most of what I was driving through. Snake River seen from just across the Idaho border. Boise next on the agenda.

The only other update I posted today actually happened at the beginning of the day, while I was still in Pendelton.

I didn’t think to take a photo of the Armchair Bookstore in Pendelton, where I went to try to leave some Street Stories Suspense series bookmarks, but it was still closed anyway. I did leave a couple books, a postcard and my business card on the doorknob. I did, however, stop at the Looking Glass books in La Grande Oregon and talked with them there. I didn’t take a picture of that store either, but the link to their site is below. They happily took a few of each and said they would look up my books. I was so happy I bought a book from them, The Virgin Blue by Tracy Chevalier. 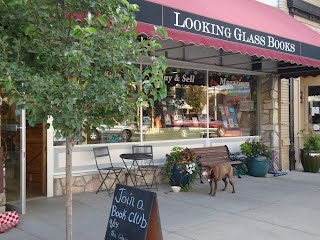