Or can I even call LaSalle, Illinois a city?  With just under 10,000 residents, does it qualify?  Even combined with the just over 10,000 population in abutting rival town, Peru, most people would not call my hometown a city.

Whatever you want to call it, whoever built LaSalle seems to want to discourage pedestrians.  In many residential neighborhoods, particularly the one where my mother lives, most blocks do not have sidewalks.  I am forced to walk the street without even the potential to make a buck off it the good old fashioned, professional way (if you get my meaning).

Where I do find sidewalks, I cannot be assured it will last long.  One house might have sidewalks in front of it and the next not, followed by two more with and then a whole block again without.  I have tried in vain to find a complete, circular route which will take me and my dog Sophie from my mother’s house (which is one of the offending no-sidewalk domiciles) at least four blocks long for good exercise and dog-pooping potential without resorting to walking in the gutter.  On average, each route gives me a 50/50 split.

Residents seem to be in on this anti-pedestrian stance as well.  There is a city service that will pick up your autumn leaves if you rake them all the way to the curb.  Some people take the pile to the curb, all right, but rather than let the debris fall over it into the street, they leave the mess completely covering the walkway when one exists.  This leaves me with the choice of either walking in the street again, or taking my chances that the concrete hidden beneath the leaves does not hold any chunks or cracks to trip me up as I shuffle my way through the brown, curled, rustling remnants of summer.

The problem does not seem to be relegated to only residential streets, either.  Bucklin Street is a fairly main throughway and, at least in this neighborhood, does have sidewalks.  But the corner crossings which have recently been set up seem determined to discourage anything so healthy as walking, let alone anything extreme like jogging (Jogging!  Lord, we can’t have that!)

Whoever put the corners in did not seem to think in a linear fashion.  Take these pictures below of three consecutive corners I crossed this morning walking south along Bucklin.

The first corner (Figure 1) assumes you couldn’t possibly want to walk the down the street.  It seems to be leading you not so subtly to turn left.  Looking to the left, you see the corresponding corner (Figure 2) is suitably ready to receive your footsteps, but seems to think you only want to go back north again. Or picnic in the vacant lot it fronts.

On the next corner (Figure 3), you are led diagonally into the center of the road.  This isn’t quite as nonsensical as it seems when you notice that to the left, the block is a bit longer than this side and if you walk diagonally, you will actually end up on the corner at the left of the road. 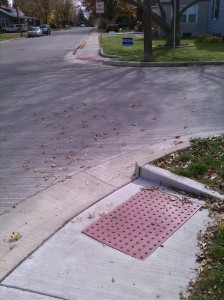 For southward travel, this corner works fine on this side of the street.  However the corner just south of here seems distinctly antisocial against northern arrivals (Figure 4).  Go east everyone, it seems to state. And anyone trying to walk in from the north has to surmount a solid, deep, defensive curb.

On the final corner  before heading back right along the last (sidewalk-less) block home, the city planner seemed to be getting the idea. The curve (Figure 5) is placed so that you can walk either forward or turn left, though there is a distinct prejudice in favor of forward. 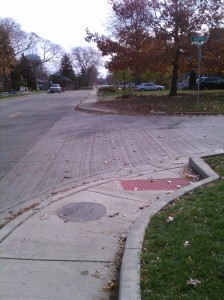 This corner even has a matching twin on the other side, but I’m done walking the streets for this morning.  Time to get back to my mother’s house, brew a cup of coffee, and dump the bag of dog poop in the trash.

Not in that order, of course.

2 thoughts on “Who Built This City?”